Description
At Hornady,® brass is the foundation for what could be the most memorable shot of your lifetime. Extra time and care is taken in the creation of our cases, producing smaller lots that meet strict quality standards.
Our cases offer reloaders excellent uniformity in wall thickness, weight and internal capacity. We measure for consistently tight wall concentricity and even run our cases through a pressure calibration test to ensure uniform case expansion during firing.
Our cases allow proper seating of the bullet, not only in the case, but in the chamber as well. High quality brass contributes to consistent charges and pressures.

Concentricity helps to ensure proper bullet seating in both the case and the chamber of your firearm. Higher concentricity also aids in a uniform release of the bullet on firing, for optimal velocity and accuracy.
Benchrest shooters have long known that uniform case wall thickness is vital to accuracy. We manufacture to extremely tight tolerances to ensure this critical element is as consistent as possible.
We treat Hornady brass as the foundation for an accurate cartridge, not a commodity. Because we take greater care in its creation youll get more reloads from Hornady brass.
Every single Hornady case, regardless of the lot in which it was produced, is virtually identical to other Hornady cases in the same caliber. For you, this means consistent pressures, velocity and accuracy  every time. 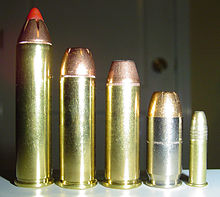 The .454 Casull is a firearm cartridge, developed as a wildcat cartridge in 1958 by Dick Casull, Duane Marsh and Jack Fullmer. It was announced in November 1959 by Guns & Ammo magazine. The design is a lengthened and structurally improved .45 Colt case. The wildcat cartridge went mainstream when Freedom Arms brought a single action five-shot revolver chambered in .454 Casull to the retail firearms market in 1983. Ruger followed in 1997, chambering its Super Redhawk in this caliber. Taurus followed with the Raging Bull model in 1998 and the Taurus Raging Judge Magnum in 2010. The .45 Schofield and .45 Colt cartridges can fit into the .454’s chambers, but not the other way around because of the lengthened case (very similar to the relationship between .38 Special and .357 Magnum cartridges, as well as the .44 Special and .44 Magnum cartridges).

The . 454 Casull round is primarily intended for hunting medium or large game, metallic silhouette shooting, and bear protection.

The .454 Casull was finally commercialized in 1997, when SAAMI published its first standards for the cartridge. The new Casull round uses a small rifle primer rather than a pistol primer, because it develops extremely high chamber pressures of over 60,000 CUP (copper units of pressure) (410 MPa), and the rifle primer has a significantly stronger CUP than a pistol primer.

The round is one of the most powerful handgun cartridges in production. The .454 Casull generates almost 5 times the recoil of the .45 Colt, and about 75% more recoil energy than the .44 Magnum. It can deliver a 250 grain (16 g) bullet with a muzzle velocity of over 1,900 feet per second (580 m/s), developing up to 2,000 ft-lb (2.7 kJ) of energy from a handgun. One Buffalo Bore loading drives a heavier, 300 grain, JFN bullet at 1,650 ft/s for 1,813 ft-lb of muzzle energy. The .454 Casull round is primarily intended for hunting medium or large game, metallic silhouette shooting, and bear protection.

The Casull cartridges were originally loaded with a triplex load of propellants, which gave progressive burning, aided by the rifle primer ignition, resulting in a progressive acceleration of the bullet as it passed through the barrel.

Who makes a 454 Casull revolver?
This big-bore handgun, developed by firearms manufacturer Sturm Ruger & Co., Inc., Southport, CT, was designed from the start to withstand the very high stresses generated by the . 454 Casull cartridge. The . 454 Casull is one of the most powerful revolver cartridges made.

There are no reviews yet.